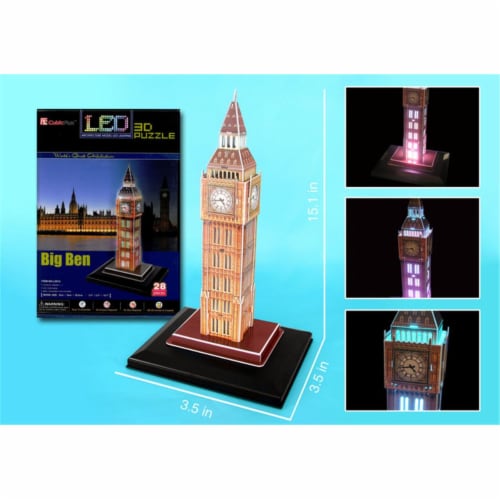 Big Ben 3D Puzzle with Base and Lights - 28 Pieces

The most beautiful and famous landmarks in the world are now yours to have in your home. Incredibly detailed fun to assemble and beautiful to display. Collect them all!. The Palace of Westminster also known as the House of Parliament or Westminster Palace in London is where the two houses of the Parliament of the United Kingdom (the House of Lords anf the House of Commons) meet. The palace lies on the north bank of the River thames in the London borough of the City of Westminster close to the government buildings of Whitehall. The magnificent Gothic Revival masterpiece you see today was built between 1840 and 1888 this was thework of Charles Barry who designed the buildings to blend with nearby Westminster Abbey. The two imposing towers well known landmarks in London are the clock tower named after it s thirteen ton bell called Big Ben and Victoria tower on whose flag pole the Union jack flien when parliament is sitting. Much of the Victorian detail of the interior was the work of Barry s assistant Augustus Pugin. The Clock Tower is a focus on New Year celebrations in hte United Kingdom with radio and television stations tuning to its chimes to welcome the start of the year. During the second world war in 1941 an incendiary bomb destroyed the Commons chamber of the Houses of Parliament but the clock tower remained intact and Big Ben continued to keep time and trike away at the hours its unique sound was broadcast to the nation and around the world a welcome reassurance of hope to all who heard it. Uses 3 AA Batteries; not included. 28 Pieces. Dimensions: 3.5 L x 3.5 D x 15.1 H.